Every taxpayer should know the difference between earned and unearned income. The distinction isn’t too complicated, but it’s very important for your taxes.

You don’t necessarily have to memorize every type of income and which category it falls into. Just remember: if you sold goods or provided labor, the money you made is earned income. If you have investment income or other sources of income that don’t involve any work or services, that money is unearned income.

How Income Types Affect Your Taxes

The federal government deducts payroll taxes from your paycheck, and the earnings cap is set at $137,700 for 2020 (which means you won’t owe any additional Social Security taxes after you exceed this cap). An amount equal to 12.4% of your earned income goes toward Social Security, but your employer splits this tax with you 50-50, so you only pay 6.2% in practice. (Self-employed people must pay the full 12.4%, but half the amount is tax-deductible in most instances.)

Medicare works somewhat like Social Security taxes: you and your employer split the tax bill, and each owes taxes equal to 1.45% of your income, for a total of 2.9%. However, unlike with Social Security taxes, there is no earnings cap on Medicare taxes. You must also pay the full 2.9% on any self-employment income, and you can’t take tax deductions to offset that amount.

Unearned income works differently than earned income. You don’t have to pay any payroll taxes, including Social Security and Medicare, on the various forms of unearned income. However, your unearned income (line 37 of your Form 1040) will count toward your adjusted gross income on your state and federal tax returns.

RELATED: What Is The Difference Between Standard and Itemized Deductions?

Income Type Can Have Major Implications on Retirement Savings

If you start saving early for retirement, you’ll end up accruing quality sources of unearned income, which is exempt from payroll taxes. Pre-tax salary deferral contributions to your retirement account or pension can lower your income tax liabilities, so these contributions will come in very handy once you retire and begin relying more on unearned income. In some cases, you may want to diversify your unearned income sources among options like Roth IRAs and traditional 401(k)s so you can combine the various tax benefits.

Also, if you’ve retired from working for others and are now self-employed, make sure to keep track of your personal payroll taxes to avoid any surprises come tax season.

The more unearned income you have in your portfolio, the more complicated your taxes can get. If you’re struggling to track your various sources of unearned income, contact S.H. Block Tax Services. We can help you avoid errors that could lead to substantial taxes and fees or even an audit.

You can reach the team at S.H. Block and schedule your free consultation by calling (410) 793-1231 or using the quick contact form on this page. Together, we can work with you to diagnose any tax issues and create a plan to resolve these problems once and for all.

The content provided here is for informational purposes only and should not be construed as legal advice on any subject. Please read our full disclaimer here. 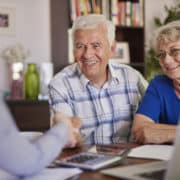 Certain Disabilities Might Qualify You for the Earned Income Tax Credit What to Expect in an IRS Correspondence Audit
Scroll to top